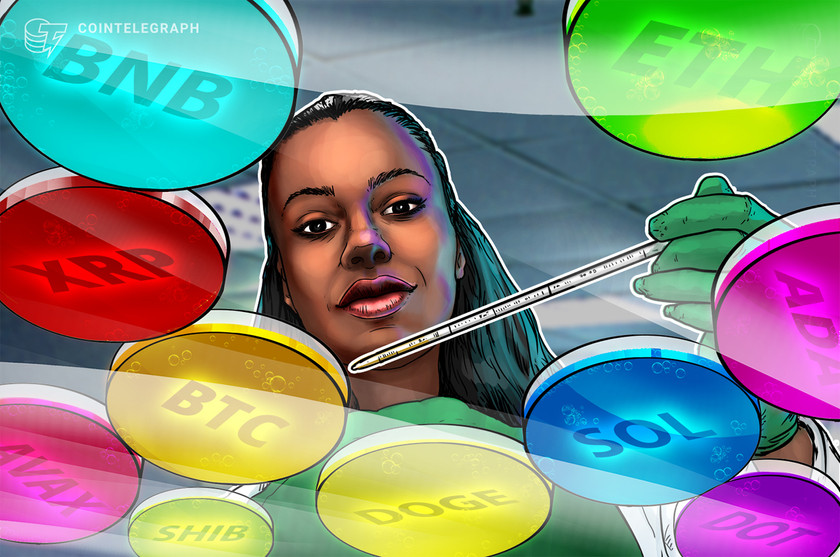 Bitcoin and most major altcoins have not tracked the recovery seen in stocks, a possible indicator that further downside is possible.

Equities markets in the United States rallied sharply on May 25 and May 26 but Bitcoin (BTC) and altcoins have not followed a similar trajectory. This suggests that traders are not confident that the crypto markets have bottomed out yet.

On-chain analytics firm Glassnode said that the number of Bitcoin whales has been reducing and on May 27, the metric fell to the lowest level since July 2020.

In a note to its clients on May 25, JPMorgan said that Bitcoin’s fall looks like capitulation and they anticipate Bitcoin and the crypto markets to rally. The bank’s analysts believe Bitcoin’s fair value is $38,000 which is about 30% higher than the current level.

Could Bitcoin follow the U.S. equities markets higher or will it decouple and continue to languish at lower levels? Let’s study the charts of the top-10 cryptocurrencies to find out.

Bitcoin plunged below the strong support of $28,630 on May 26 but the bulls could not sustain the lower levels. The long tail on the day’s candlestick shows that the bulls aggressively purchased the dip.

The bulls are again trying to defend the support at $28,630, which is an important level to keep an eye on. If the price rises from the current level and breaks above the 20-day exponential moving average ($30,868), it will suggest that the BTC/USDT pair may have bottomed out. The pair could then rally to the 50-day simple moving average ($35,721).

Conversely, if the price turns down from the current level or the overhead resistance, it will suggest a lack of demand at higher levels. That may increase the possibility of a break below $28,630. If that happens, the pair could retest the crucial level at $26,700. A break and close below this level could intensify selling and the pair may plummet toward $20,000.

Ether (ETH) dipped and closed below the uptrend line on May 25 suggesting that bears were attempting to re-establish their supremacy. The selling picked up momentum on May 26 and the price plunged below the May 12 intraday low at $1,800.

The bears are trying to defend the crucial support at $1,700 but the rebound lacks momentum. This suggests that bulls are not aggressively buying at the support. That could embolden the bears who may attempt to sink and sustain the price below $1,700. If they succeed, the ETH/USDT pair could plummet to $1,300.

The long wick on Binance Coin’s (BNB) May 25 candlestick shows that bears are selling on rallies nearing the critical overhead resistance at $350. The selling continued on May 26 and the price broke below the 20-day EMA ($320).

There is a minor support at $286 where the bulls will attempt to arrest the decline. If they succeed, it will suggest that the sentiment has changed from selling on rallies to buying on dips. The bulls will then again strive to push the price to $350.

Alternatively, if the price breaks below $286, it will suggest that the aggressive bulls who may have been trapped after buying the break above $320 may be exiting their positions. That could sink the BNB/USDT pair to $260.

Ripple (XRP) broke below the immediate support at $0.38 on May 26 but the long tail on the day’s candlestick suggests strong buying at lower levels. The buyers will try to push the price toward the downtrend line.

If the price turns down from the downtrend line, the bears will again attempt to sink the XRP/USDT pair below $0.38. If that happens, the pair could drop to the May 12 intraday low at $0.33 where the bulls are likely to mount a strong defense. The bears will have to pull the price below this support to indicate the resumption of the downtrend.

On the other hand, if bulls push the price above the downtrend line, the pair could rally to the 20-day EMA ($0.44). This level may again act as a stiff resistance but if bulls overcome this barrier the recovery could reach the psychological level at $0.50.

The downsloping moving averages and the RSI near the oversold territory suggest that bears are in command. If bears sink and sustain the price below $0.40, the selling could pick up momentum and the ADA/USDT pair may plummet to $0.33.

Conversely, if the price rebounds from the current level or the support, it will suggest strong buying at lower levels. The bulls will then try to drive the price above the 20-day EMA ($0.56). If they succeed, the pair could rally to $0.61 and later to $0.74.

Solana (SOL) broke below the immediate support at $47 on May 26 suggesting that traders who may have bought at lower levels are closing their positions. This opens the doors for a possible drop to the crucial support at $37.37.

If the price rebounds off $37.37, the buyers will attempt to push the price to the 20-day EMA ($55). This is an important level for the bears to defend because a break and close above it will suggest that the SOL/USDT pair may have bottomed out. The pair could then attempt a rally to the overhead resistance at $75.

Alternatively, if bears sink the price below $37.37, it will suggest the resumption of the downtrend. The pair could then extend its decline to the next support at $32.

Dogecoin’s (DOGE) tight-range trading resolved to the downside on May 26 and bears pulled the price below $0.08. This suggests that supply exceeds demand.

If bears sustain the price below $0.08, the DOGE/USDT pair could drop to the vital support at $0.06. As this level had acted as a strong support on May 12, the bulls may again try to defend it. If the level holds, the pair could climb toward the 20-day EMA ($0.09).

Another possibility is that if bulls push the price back above $0.08, it will suggest demand at lower levels. The buyers will then try to propel the price toward the 20-day EMA. A break and close above this resistance will suggest that the bears may be losing their grip. The pair could then rally to the psychological level at $0.10.

Related: 3 reasons why Bitcoin is regaining its crypto market dominance

Polkadot’s (DOT) failure to climb and sustain above the breakdown level at $10.37 attracted selling by traders. The bears pulled the price below the immediate support of $9.22 on May 26 but are struggling to sustain the lower levels.

The price rebounded off the immediate support at $8.56 and the bulls are attempting to clear the overhead hurdle at the 20-day EMA ($10.88). If they manage to do that, it will suggest that the downtrend may be weakening.

Contrary to this assumption, if the price once again turns down from the overhead resistance, the bears will try to pull the DOT/USDT pair below $8.56. If they do that, the next stop could be $7.30.

The bulls are likely to defend this level aggressively but if they fail in their endeavor, the pair could start the next leg of the downtrend.

Avalanche (AVAX) continued lower and plunged below the important support of $23.51 on May 26. This indicates the resumption of the downtrend.

Although the downsloping moving averages favor the bears, the RSI in the oversold territory suggests a relief rally or consolidation in the near term. If the price turns up and rises above $23.51, it may trap several aggressive bears, resulting in a short squeeze. That could push the AVAX/USDT pair to the 20-day EMA ($34).

Alternatively, if bears sustain the price below $23.51, the selling could pick up momentum and the pair may decline to the psychological support at $20.

Shiba Inu (SHIB) continues to be under pressure. Although bulls are defending the support at $0.000010, the rebound lacks strength. This suggests weak demand at current levels.

The bears will attempt to pull the price below $0.000010 and if they succeed, the SHIB/USDT pair could decline to the critical support at $0.000009. This is an important level to keep an eye on because a break and close below it could indicate the resumption of the downtrend. The pair could then decline toward $0.000007.

People who bought at the top at the end of 2017 and who are still holding, how are you holding up?