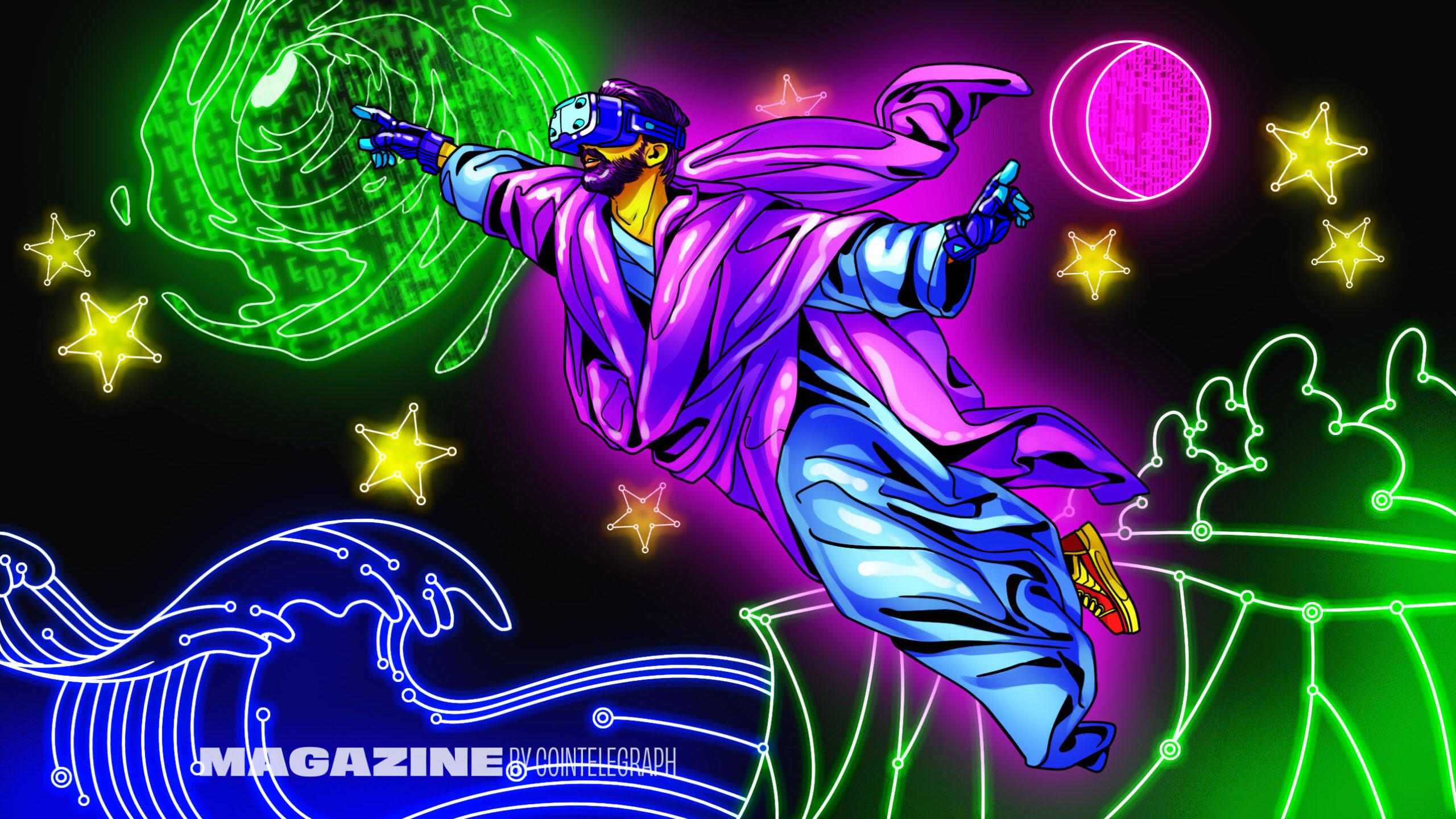 When it comes to designing a metaverse map, its more about the vibe than practicality. From space pods to jungle islands and celebrity neighbors, users want to feel like they are someplace special.

What considerations go into designing a metaverse platform? Insiders explain that one key factor is that virtual worlds need to be created with features familiar to their human users even if such elements, like beaches and nature preserves, offer no practical benefits in virtual reality. Old habits die hard, and people prefer spaces that are familiar and, ideally, neighboring a celebrity like Snoop Dogg.

Alexis Christodoulou, a 3D architect who has been creating virtual spaces for 10 years and NFTs for two, recently got the job to design 2117, a space-themed metaverse platform imagining the United Arab Emirates stated goal to colonize Mars in the year 2117.

If I was told to just build a metaverse, Id have had a proper nervous breakdown starting with a space pod was intuitive.

Outer space, like the metaverse itself, is a foreign environment for humans. Looking 100 years into the future, it is easy to imagine a creepy, inhuman, alien-like ship without many points of familiarity. Instead, Christodoulou has aimed to form the environment into one that appears comfortable, familiar and inviting.

Noticing that his early design seemed a little cramped, I started putting windows in the space pod and realized it was more comfortable a concept that sounds odd, given it is effectively a video game, but somehow makes intuitive sense.

Were still so human and base everything on the real world because we havent spent long enough in the metaverse, he reasons, explaining that real-world bias explains why people are likely to prefer secluded metaverse beaches or islands instead of properties closer to infrastructure, such as portals. We still have real-world values in the metaverse, but that might change in 10 years, Christodoulou predicts.

To begin the virtual future journey to Mars, users need to purchase a citizenship card, an NFT that gives users access to their pods. Like in any work of fantasy, there is an element of worldbuilding that needs to be created by which the designed space is made to follow a certain logic.

How does the spaceship work? What is it carrying in order to facilitate its task of Mars colonization? What are the people doing on their way there? Christodoulou asks himself, calling 2117 a story-driven metaverse with an ongoing and developing plot.

What really is a metaverse?

But are metaverse platforms really just video games? For Christodoulou, a video game is something that is primarily task-driven, catering to the completion of defined quests where community and social aspects are secondary for example, a shooting game where an online guild may train together to become better online marksmen. The metaverse is somewhere you want to simply exist you can choose to do quests, but its not required, he says, explaining that instead of being a mere individual challenge, it is more of a collective journey through a developing story.

Sara Popov, creative director at the Paxworld metaverse platform, agrees, explaining that a the metverse is more of an experience than a game, with the latter having clear objectives, while the former is more of a facilitating environment for whatever the player wants to do.

Unforgettable: How Blockchain Will Fundamentally Change the Human Experience

World of Warcraft was one of the first metaverses, she says, referring to an online multiplayer game set in a virtual world where players themselves could decide whether they wanted to fight monsters, trade, make friends or help new players. Whatever the differentiation, Popov clarifies that the process of metaverse design is very similar to that which can be found in a video game production.

Janek Borkowski, digital strategist at Paxworld, describes the metaverse as a growing world that is not defined without beginning, middle or end, adding that he believes that a generational gap prevents many from understanding these new developments:

If you talk to a younger person, they may understand video games differently than an older person.

It is perhaps for this reason that Apples CEO Tim Cook recently explained that the company has avoided associating itself with the concept altogether, because Im really not sure the average person can tell you what the Metaverse is.

To facilitate its development into a social community, Paxworld has three tiers of land some of which is sold to individuals in order to give people a sense of ownership and to allow them to express themselves, that which is reserved for the community as public space to facilitate co-creation, and finally, land that is preserved in its natural state and acts in essence as a nature preserve and buffer.

We all know the mantra of location, location, location when it comes to real estate, but how does this translate to the metaverse, where the supply of virtual land can be understood as artificially limited and where commute times are effectively nonexistent?

Brian McClafferty, who is responsible for marketing Paxworlds digital land, believes that it is important to keep variety in the types of land available because we all have our preferences in the real world, too some value waterfronts due to some subjective feeling, he notes. The location, though digital, can inspire all kinds of thoughts, as users might soon start dreaming of digital boats. What will you do with a boat in virtual reality? The same thing as reality: You will go on it and enjoy the view! he explains, as if stating the obvious. If boats are not supported on a particular metaverse, enough popular demand and community requests are likely to bring them to reality.

Indeed, there are already people designing and selling metaverse yachts.

People imagine this as a second life maybe they cant live in the house of their dreams in the real world, but in the virtual world, people can have a better virtual house than others, he explains. Why does someone pay more to be far from others on a metaverse beach? Maybe thats how theyd want to live in the real world.

In Paxworld, he explains that algorithms say that those land plots closer to seas, hubs (sarais, as they are called in Paxworld) and highways cost more, while those further away from defining features can be had for cheaper.

Another type of coveted metaverse land can be found around the plots of famous brands or celebrities, such as Snoop Dogg, who famously owns a large plot in The Sandbox. According to McClafferty, such notable land plots raise the value of nearby land due to buyers who want bragging rights by being neighbors with a celebrity, or companies looking to associate with the brand or person by way of proximity. Influencers who are trying to draw people to their land, on the other hand, may select such plots because they are perceived as being busier due to the attention.

It could be said that celebrity- and brand-affiliated metaverse plots serve as Web3 landmarks. Indeed Animoca Brands a major investor in The Sandbox has built its strategy around attracting users to virtual worlds through the use of familiar brands.

Read more: Billions and Billions: How Brands Take Blockchain From Niche to Normal

Building in the metaverse

When we first started Paxworld, it wasnt called a metaverse, Popov recalls, describing the idea as a virtual space that would bring people together and foster communities while bringing art and new aesthetics into the mix.

This was meant to attract a more mature audience than more gamified and playful metaverse platforms, such as The Sandbox and Decentraland, she explains. Among architectural influences, she lists Bauhaus and minimalism as key elements to be combined with video chat functions.

When designing items for metaverse platforms, Popov says that whatever you design, expect people to use them differently than expected such as tables being flipped in order to make walls.

When it comes to metaverse architecture, there are two broad approaches: recreating models of reality and designing fantastical elements that would be difficult to implement due to the physical, financial and/or engineering constraints of the real world.

Subscribe
The most engaging reads in blockchain. Delivered once a week.

While the 2117 spaceship concept would firmly fit into the latter, at least in 2022, it is worth noting the efforts made to make the space pod interiors appear familiar.

Historical accuracy is the opposite of imagined futures and is another example of how a metaverse can be constructed. In a metaverse world based on ancient Greece, for example, people can gain a historical appreciation that is far more immersive and interactive than by watching a mere documentary, allowing people, items and activities to come to life.

When you are in a classroom listening, you learn 10%; if you read a textbook maybe 20%. If you are taken into a metaverse to walk around, its entirely different.

We are seeing architects recreating 1:1 copies from real life, only with a metaverse twist of floating elements or movement, she explains, saying that such additions remind the user that the environment is not real.

Were not looking at static sculptures or Renaissance paintings in museums anymore Were looking at sculptures that are actually moving, she explains, optimistically adding that the metaverse is allowing new generations to experience in upgraded and relatable ways, going as far as to compare the metaverse age to a new Renaissance.

Its the golden age of the artist because it was during the Renaissance that art moved from churches to private homes. Now were seeing this next big evolution in art where we are seeing it in a new medium.

Though NFTs are one way in which art can be connected to the metaverse, not everything needs to be an NFT. One does not need an NFT to display artwork in a metaverse world any more than one is needed to show a JPEG on a website the NFT, in this case, is perhaps better understood as the artist-sanctioned authenticity certificate, and this is not necessarily always needed, especially if there is no intention to sell.

The role of blockchain

Blockchain, decentralization, cryptocurrency and NFTs are seen as an intrinsic part of an interoperable metaverse by many readers of Magazine. After all, digital ownership via NFTs is an important factor that will encourage users to create and profit from constructing their own corner of a world, or items that can be used in it.

But big companies arent as keen, and Mark Zuckerberg, for one, does not seem to equate the two particularly closely, with his vision falling closer to a centralized virtual space rather than a decentralized world owned and controlled by users.

But perhaps instead of being an essential component, decentralization and blockchain technology will merely be a component in part of the metaverse space. Much like laws vary wildly between countries in real life some allow absolute ownership of land, whereas others only recognize temporary occupancy rights, for example it perhaps makes sense that there will be different types of metaverse platforms, some operating on principles of anarchy, others on absolute rule just like despite millennia wars and philosophic debate, the real world, too, maintains many different systems of government.

If you want to go down the Web3 route and start handing ownership over to the users/citizens of these worlds, then I think you do need to consider using blockchain technology, explains McClafferty, who concedes that a metaverse does not necessarily need a blockchain element. Similarly, we can make the argument that while augmented reality is a great tool to bring metaverses to life, it is a separate technology and does not define the movement.