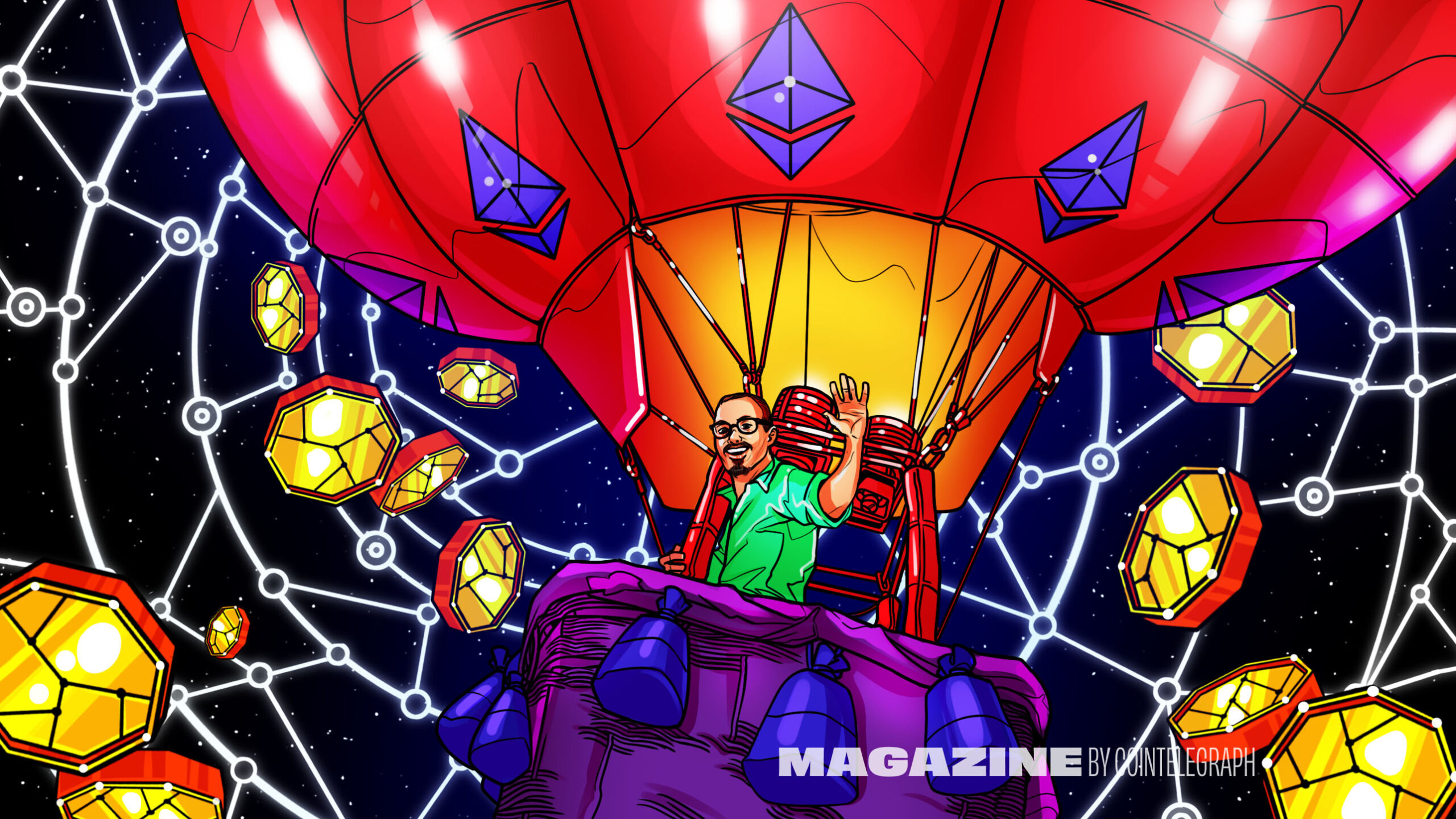 Steve Newcomb is a Silicon Valley veteran with a long list of achievements. He built software for trading energy in the 90s, was a pioneer in adding email to phones, and helped create the back end of the Bing search engine under Peter Thiels mentorship. Today, he heads up development for Berlin-based Matter Labs, which is building scaling solutions for Ethereum.

I was very much a skeptic when it came to cryptocurrency and blockchain, explains Newcomb, zkSyncs chief product officer. He adds that it took two years of study before he understood the topic and the benefits to his satisfaction.

Calculating that Ethereum had a 65% market share of the layer-1 market, Newcomb was convinced that it held the greatest promise in becoming the de facto world computer. But he describes blockchain as being slow and cumbersome today as the internet was 25 years ago, so he set to work scaling it up to one day to become as fast as Web2 is now.

Layer 2s to the rescue

As a veteran of the dot-com era, Newcomb sees the current state of the blockchain environment not just Ethereum as similar to that of the internet in 1995, when the World Wide Webs 25,000 websites could be accessed by average dial-up speeds of less than 30 kilobits per second.

Its slow as molasses. Our very well-known Ethereum internet computer that claims to have the power to change the world runs at a grand total of 15 transactions per second, and we have 4,000 legitimate projects on Ethereum very, very similar to 1995.

Just 10 years later in 2005, websites numbered over 100 million, and speeds had increased at least thirtyfold. We had SSL, we had HTTPS by then that little lock icon appeared in our browser. Amazon happened, Google happened, he lists. Today, in 2022, there are over 1 billion sites, and speeds over 200 megabits are common even on mobile devices far superior to anything Nokia engineers could have even dreamed of 20 years ago.

Just like the advent of SSL and HTTPS, which made the internet secure allowing for online shopping and the safe transmission of private data Newcomb is convinced that the layer 2s that make crypto secure are where 10x moments are happening.

If you think that the goal of layer 2s is to scale Ethereum while maintaining its decentralization and security, sidechains do not achieve this. They have far less security than Ethereum does, because their functional chain is not on Ethereums chain, he states matter-of-factly.

He feels similarly about state channels and plasma, arguing that they just literally dont check the boxes. This leaves only Optimistic Rollups and zk-Rollups in Newcombs good graces. His passion comes across as a rather assertive, perhaps unfair, dismissal of a significant portion of the layer-2 landscape but lets save that discussion for a future article.

My mission is to make sure that Ethereum wins. I want it to be the first that gets it to go from 15 to 1,000 or 10 million transactions per second. I want to be in the room when it happens.

No stranger to technology, Newcomb has fond memories from the 70s when at 6 years old he would solder motherboards with his father, who worked for an agency I cant name. He describes a desire from an early age to be part of history, which propelled him in his career. In his view, one should find out what they think the most important thing happening is, and then participate in that thing in whatever way they can. Cellphones were the first of these grand phenomena.

When I set out on my career, I asked myself: Is this something thats going to affect millions of people? Is it a big deal? Can I add value in some way?

In 2000, Newcomb founded LoudFire, a company that aimed to build consoles that would control smart homes, which he describes as an abject failure except that we realized how to take email from a computer and put it on your Nokia phone, which was a revolutionary combination of two previously separate technologies. Naturally, the firm was sold to Nokia in 2002, which was the pre-iPhone juggernaut dominating the mobile phone industry at the time.

In 2008, he founded Powerset, a natural language search engine that was essentially sold to become a central component of Microsofts Bing. He recalls pitching the project to investor Thiel by having him type a search and then asking him to select whether Googles results or those from Newcombs solution were better. He chose us 70% over Google, Newcomb recalls, after which he promptly had $800,000 in the bank and a new mentor.

Two of my junior engineers split off to create a small company called GitHub, he remarks.

Newcomb describes himself as having been something of a troublemaker growing up, applying to Salisbury University in Maryland on the basis that it was close to a beach where he could spend his days mostly ignoring school while majoring in accounting.

In the 1980s, he wrote an algorithm to automatically generate the scripts for used car dealerships TV and radio commercials with cheesy music and some cheesy sales guy, charging thousands a pop. His second business while in university was effectively a pre-internet version of LinkedIn, charging students to distribute their resumes to other universities across the region via a system of interconnected printers.

Upon graduating, Newcomb joined the energy company Statoil in 1993, reasoning that it seemed like an important industry to get into, as the U.S. government had just deregulated the energy markets. At just 21, he says he was trading $600 million worth of energy deals per year, and he learned to code in Object Pascal on the side in order to make his job easier by automation and easier control.

As the company began using his software to trade billions in annual volume, Newcomb says he realized the true power of coding and fell in love with software, eventually being promoted to head of engineering for North America. In 1998, he joined Proxicom, where he led the production of trading systems for the energy sector. By 1999, he was responsible for AT&Ts internet and streaming video strategy.

Also read: Ethereum is eating the world You only need one internet

With his history as witness, Newcomb does not think small. For him, the end game of Ethereum is security so perfect that no quantum computer can break it and decentralization so good that no nation-state can stop it in other words, a private internet computer that cannot be hacked by any computer or stopped by any nation-state.

I want people to understand that this is more important than technology; this is possibly as important as what comes after capitalism and democracy, he says. He elaborates that when a new technology comes along, it normally replaces an incumbent, as when iPhone replaced Nokia.

What is the incumbent that blockchain replaces? If you think about it, its government.

If thats true, there is a desperate need for adults in the room, and Newcomb quips that he is finally old enough to be considered one. Imagine we built a door that can never be knocked down. What would people do in their homes? he asks, describing the encryption of Ethereum as an impenetrable door behind which people can trade and interact freely in such a way that no government, institution or authority can reach them a blockchain that runs on its own and is almost free to use.

If you have a private blockchain and people decide to do business on it, then governments no longer have a way to tax people and governments are gone. Well, maybe. History is being made one way or another, and Newcomb is doing his best to be part of it.

So, what are these rollups to begin with, and why are they better, according to Newcomb?

According to Ledger Academy:

Rollups roll up or compile a bunch of transactions and turn them into one single data and submit it to the Ethereum mainnet. They take the transactions out of the mainnet and process them off-chain, convert them into one single piece of data, and submit them back to the Ethereum mainnet. This is why rollups are also called off-chain scaling solutions.

Subscribe
The most engaging reads in blockchain. Delivered once a week.

There are two primary types: Optimistic Rollups and zk-Rollups.

According to Newcomb, Optimistic Rollups, as used by Optimism and Arbitrum, ultimately depend on a sophisticated game theory, which effectively allows everyone to use the blockchain. And then, after the fact, they check to make sure that there is no fraud.

With this system, you could be maybe 99.999% sure theres no fraud, but you cant be 100%. Its the very best game theory we have, and it does scale Ethereum by a factor of seven, maybe up to 10. Though he concedes that it passes as a scaling solution, Newcomb expresses concerns about settlement times at increased levels of scaling, describing the process as increasingly hairier and saying that he couldnt understand how it scales beyond the original 10x.

Zk-Rollups, on the other hand, check for fraud using mathematics something called a ZK proof that isnt 99.999% accurate. It does not use game theory. It is literally mathematically perfect. There are competing zk-Rollup layer 2s from ConsenSys, StarkNet and Polygon.

Clearly, they are Newcombs preferred solution, one that he says was previously thought to be too expensive and 10 years away from effective implementation but weve solved those things much faster than anyone predicted.

Zk-Rollups, for me, represented both scale and security combined at unlimited scale. We theoretically could get up to millions of transactions per second, making this a real internet computer, and we could do so while perfectly maintaining security.

Zk-Rollups are not a singular project but a technical solution being worked on by various separate teams. Of these, Newcomb lists his top three (working on EVM-compatible solutions): Matter, Scroll and Polygon. He considers Matter, which he works for, to be nine to 12 months ahead of Scroll and Polygon, with other solutions being roughly one to two years behind a view he has arrived at via a five-point list of magic ingredients he believes are needed for a ZK solution to be adopted.

Firstly, an L2 solution should be general purpose, meaning that any DApp or smart contract can be built to interact with it, as opposed to accommodating only special use cases such as NFTs.

Secondly, the solution should be EVM-compatible, meaning that like with BNB Chain, Polygon, Solana and Avalanche, Ethereum projects can be easily ported over. Bitcoin, Monero, Litecoin, Cardano and XRP Ledger are totally different and are examples of non-EVM compatible chains.

Fourthly, a ZK-proof solution needs to be open-source, or the community of crypto will become riled up against you, as it would not fit the ethos.

The actual best case is that ZK becomes a standard. Thats why we open-sourced it, so that it can become a public good. Our hope in the future is that there are no other protocols it is just the protocol.

Whatever layer-2 solution(s) end up taking center stage in the coming years, what Newcomb looks forward to most is the public nature of progress that is inherent to blockchain as opposed to previous eras of technological development. Engineers used to see things privately and talk about them after. We get to see progress live on-chain.

Crypto Is Alive and Well, Though Skeptics Say It’s Not Money