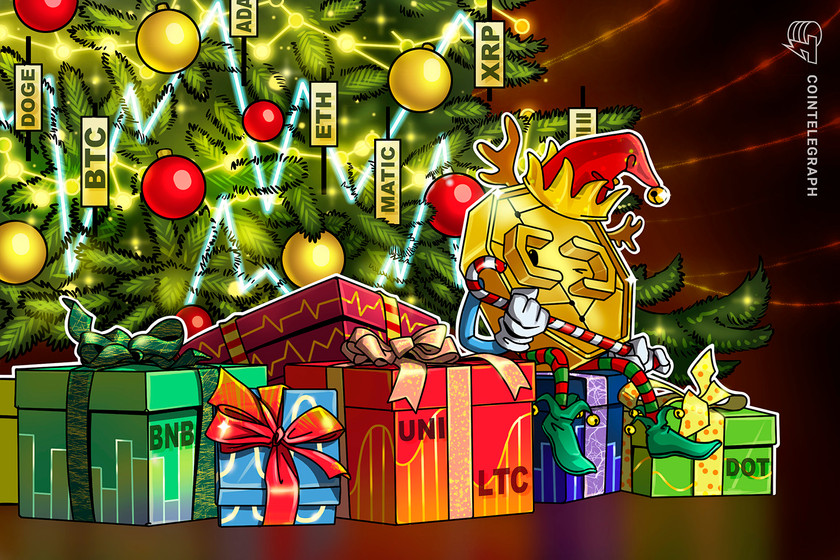 Bitcoin and select altcoins have turned down from overhead resistance levels, indicating that bears remain in control.

Gold has been an outperformer in 2022 compared to the United States equities markets and Bitcoin (BTC). The yellow metal is almost flat for the year while the S&P 500 is down more than 19% and Bitcoin has plunged roughly 64%.

In spite of gold’s good showing and Bitcoin’s dismal performance in 2022, billionaire investor Mark Cuban continues to favor Bitcoin over gold. While speaking on Bill Maher’s Club Random podcast, Cuban told Maher, “If you have gold, you’re dumb as fuck.” He advised Maher to “just get Bitcoin.”

Could Bitcoin lead a recovery in the final few days of the year or will the crypto markets close the year with a whimper? Let’s study the charts of the top-10 cryptocurrencies to find out.

Bitcoin has been stuck inside a tight range between $16,559 and the 20-day exponential moving average ($16,877) for the past few days. This indicates that both the bulls and the bears are lying low during the holiday season.

The 20-day EMA is sloping down gradually and the relative strength index (RSI) is near 43, indicating a slight advantage to bears.

Buyers are expected to fiercely defend this zone because if it collapses, the pair could start the next leg of the downtrend.

If the price turns up from the current level and breaks above the moving averages, it will suggest that bulls are attempting a comeback. The pair could then soar to $18,388 where the rally may again hit a roadblock.

The failure of the bulls to push Ether (ETH) above the 20-day EMA ($1,223), indicates that the bears are defending the level with vigor. That may have led the bulls to surrender and close their positions.

The pair could now slump to $1,182. If this support fails to hold, the ETH/USDT pair may sink to the robust support at $1,150. If the price bounces off this level with strength, it will suggest that the pair may consolidate between $1,150 and $1,352 for a few days.

On the other hand, if the price nosedives below $1,150, the pair will complete a bearish head and shoulders pattern. The pair could first decline to $1,075 and then plunge toward the pattern target of $948.

Buyers tried to catapult BNB (BNB) above the overhead resistance zone between $250 and $255 on Dec. 27 but the bears held their ground. This suggests that the bears are trying to flip the $250 level into resistance.

The BNB/USDT pair could now slide to the immediate support at $236. If the price rebounds off this level, it will indicate that the pair may remain stuck inside a tight range between $236 and $255 for a while longer. That could increase the likelihood of a break above the overhead resistance.

On the contrary, if the price tumbles below $236, it will suggest that the bears are trying to assert their supremacy. The pair could then retest the critical support at $220. A break below this level could open the doors for a possible dip to $200.

XRP (XRP) scaled above the 20-day EMA ($0.36) on Dec. 26 but the bulls could not sustain the tempo and overcome the barrier at the resistance line of the symmetrical triangle. This may have tempted the short-term bulls to book profits.

The XRP/USDT pair fell back below the 20-day EMA on Dec. 28. The pair could now decline to the support line of the triangle. This suggests that the pair may extend its stay inside the triangle for some more time.

Dogecoin (DOGE) has dropped to the crucial support at $0.07 on Dec. 28. This level successfully held off assaults by the bears on three previous occasions, hence the bulls will again try to protect it.

If the price rebounds off the current level and breaks above the downtrend line, the bearish descending triangle pattern will be negated. That could result in short-covering by the aggressive bears, propelling the price to $0.11.

Conversely, if the price breaks and closes below $0.07, the descending triangle pattern will complete. That could start a downward move toward $0.06 and thereafter to the pivotal support near $0.05.

Cardano’s (ADA) recovery stalled just below the 20-day EMA ($0.27) on Dec. 27, indicating that relief rallies are being sold into.

The bears will try to sink the price below the strong support near $0.25. If they manage to do that, the ADA/USDT pair could slump to the support line of the falling wedge pattern. This level has acted as a strong support on several occasions, hence the bulls will again try to defend it aggressively.

On the upside, a break and close above the 20-day EMA will be the first indication that the selling pressure could be reducing. The pair could then advance toward the downtrend line.

The bulls failed to pierce the 20-day EMA ($0.82) on Dec. 27, indicating that the sentiment remains negative and traders are selling on rallies. Polygon (MATIC) could slip to the immediate support at $0.75.

If the price breaks below $0.75, the MATIC/USDT pair could fall to the strong support at $0.69. This is an important level to keep an eye on because if it cracks, the pair could start a downtrend. The next support on the downside is $0.52.

If the price turns up from the $0.75, it will suggest that the bulls are buying on minor dips. They will then try to clear the overhead hurdle at the 20-day EMA and thrust the price toward $0.97.

In a strong downtrend, the relief rallies are usually shallow and do not last long. That is what happened in Polkadot (DOT), which turned down on Dec. 27 and broke below the $4.37 support on Dec. 28.

Both moving averages are trending down and the RSI is near the oversold territory, indicating that bears are firmly in the driver’s seat. If the price sustains below $4.37, the DOT/USDT pair could plummet to the next support at $4.

The first sign of strength will be a break and close above the 20-day EMA ($4.73). The pair could then rise to the 50-day SMA ($5.21). A trend change will be signaled after bulls thrust the price above the downtrend line.

Litecoin (LTC) jumped above the moving averages on Dec. 26 but the bulls could not sustain the momentum. This suggests that demand dries up at higher levels.

The LTC/USDT pair dropped back below the moving averages on Dec. 27 and the bears are trying to pull the price below the uptrend line on Dec. 28. If they manage to do that, the pair could fall further to $65 and later to $61.

Contrarily, if the price turns up and breaks above the moving averages, it will suggest that the bulls are buying on dips. The bulls will then again attempt to kick the price to the overhead resistance at $75.

The long wick on Uniswap’s (UNI) Dec. 27 candlestick shows that bears continue to sell on relief rallies near the 20-day EMA ($5.42).

The bears maintained their selling pressure on Dec. 28 and are trying to sustain the price below the support line of the triangle. There is strong support near $5 but if this level gives way, the UNI/USDT pair could start a downward move to $4.60.

If buyers want to prevent the decline, they will have to quickly push the price back above the moving averages. That could trap the aggressive bears and propel the pair toward the resistance line of the triangle.