Data shows a Shiba Inu whale has withdrawn $34.7 million in SHIB from Binance, a sign that could be bullish for the price of the meme coin.

As per data from the crypto transaction tracker service Whale Alert, a massive Shiba Inu transfer has taken place during the past day. This transaction involved the movement of 4,000,000,000,000 SHIB on the Ethereum blockchain, worth about $34.7 million at the time of the transfer.

Since the transaction here is so large, it’s likely that the entity behind it was a whale. Sometimes, movements from this cohort can have visible impacts on the market due to the sheer scale involved in them. But how the price would respond to their moves depends on what their intention was with the transfer in question.

Here are some additional details surrounding this Shiba Inu whale transaction that may help form a more complete picture regarding the intent behind it: 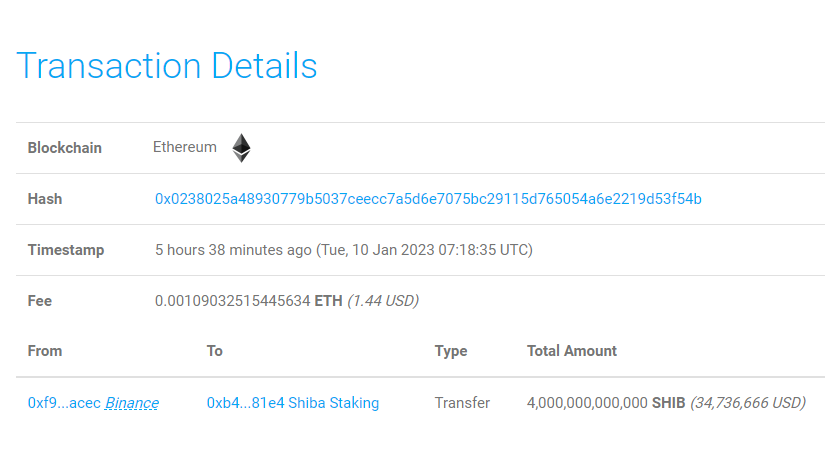 As you can see above, the sending address for this transfer was a wallet affiliated with the crypto exchange Binance, while the destination of these coins was a wallet attached to the SHIB Staking service. Staking is a process that involves investors locking a number of tokens into a contract for some duration of time and earning some rewards for it in return.

Since the Shiba Inu whale moved this massive stack from an exchange (which investors keep coins on to prepare for dumping) to this staking contract, it’s likely that this humongous investor plans to hold onto these coins for an extended period. This would suggest that the whale is bullish on the prospects of the meme coin at the moment.

Such HODLing conviction could prove to be constructive for the price itself in the long term. Also, in the past day, the 100 biggest Ethereum whales have also gone around shopping for SHIB, as data from WhaleStats displays below. Naturally, such accumulation from the whales is also a positive sign for the asset’s value.

JUST IN: $SHIB @Shibtoken is back on top 10 purchased tokens among 100 biggest #ETH whales in the last 24hrs

An interesting thing about these latest whale developments is that they have taken place while the crypto’s price has been rallying upwards.

Usually, some whales try to dump while they can during profit-taking opportunities like now (thus providing impedance to the rally in the process), but as they have been accumulating instead, it shows that they believe this rally could go on a while still, and thus further provides evidence of their conviction in the coin.