GMX Is The Third Most Active Platform 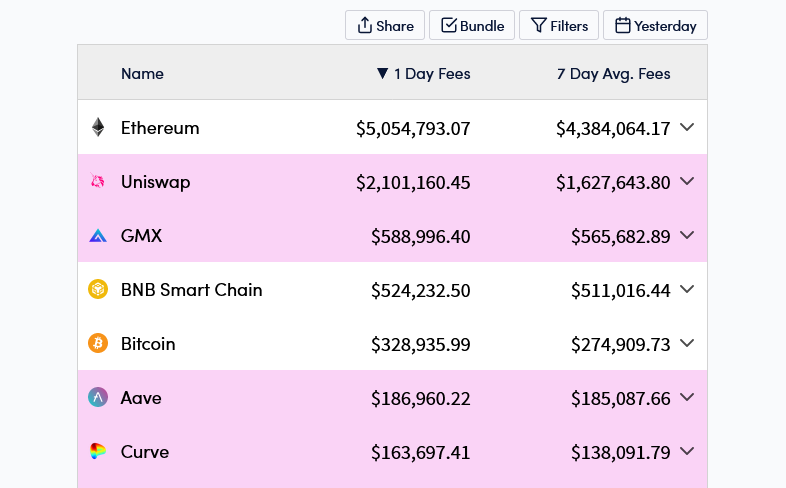 Ethereum and Uniswap are the only two major protocols more active than the perpetual trading decentralized exchange, per the above data. During this time, the total Gas fees accrued in Ethereum exceeded $5 million. In Uniswap, it was over $2.1 million, roughly 4x GMX’s and BSC’s daily fees.

GMX supports trading various coins, including BTC, ETH, and AVAX. As of writing, GMX had $96,802,651,673 in total trading volume with open interest, that is, the number of opened positions, long and short, of $207,102,720. Meanwhile, over 208,000 active traders were using the platform to trade on Arbitrum and Avalanche. GMX launched on Arbitrum and Avalanche, considering their scalability and low fees versus Ethereum.

Arbitrum is Ethereum’s layer-2 platform permitting scalable and low-fee trading fees. On the other hand, Avalanche is scalable and boasts the fastest settlement time in crypto. By launching on these two platforms, GMX says it allows users to save on costs by entering and exiting positions with minimal spread and zero price impact.

Traders take the profits of selling positions in USDC and the quote token when they go long. GMX prices are based on Chainlink’s decentralized oracles to prevent price manipulations.

Trading Fees As A Measure Of Activity

Trading fees generated by a dApp or on a blockchain are a crucial activity indicator. Despite the tendency of users to opt for protocols offering near-zero fees, the decentralized nature of blockchains means validators or entities securing core infrastructures must be compensated.

In decentralized finance dApps like Uniswap and GMX, trading fees generated from swapping activities are distributed to liquidity providers (LPs). There are also governance tokens that are distributed. Anyone can be an LP.

In September 2020, Uniswap distributed UNI to users who had, in one way or another, used the protocol to swap tokens before the airdrop distributing date. Currently, UNI trades at $6.1.

Interestingly for GMX, the 1-day trading fee of $589,000 posted on January 19 exceeds the total average amount accrued over the past trading week of $565,682. The same trend can be observed in the top-5 most active platforms. Making extensions on this could point to renewed interest from users and traders using the protocol in one way or another.

In GMX, it could mean more traders are posting traders, aiming to clip the market and turn in a profit. Coincidentally, the upswing in trading fees is recorded when the cryptocurrency market appears to be bottoming up after losses. At least, this was the trend in 2022.

Where to buy monero

Question about the essency and future of bitcoin